Ninety-nine means a lot of history for a journalist.

Unofficially, Theo Jean Ahrends was born a journalist. Her father ran a newspaper stand in the city center. She was the first female editor of the Daily Northwestern, graduating Phi Beta Kappa from Northwestern University. She was twice president of the Peoria Newspaper Guild and went on the picket line for better health care in the 1950s.

All this, be careful, by typing reams of copy with two fingers.

Even after retiring in 2010, she kept her taste for the news. She religiously read the New Yorker and constantly watched C-Span. She was a co-owner of Community Word and no doubt prompted her late husband’s architectural firm to buy ads here.

Theo did not readily support imbeciles. She hardly suffered friends with pleasure. But if you were lucky enough to be Theo’s friend, she would shower you with food, flowers, and thrift stores from Potter & Anderson. Just be careful not to do any favors: Theo was a much better giver than receiver, especially when it came to birthdays after 80. Balloons, yes. Numbers, no.

She was tangy. She was tough. She was terrifying.

Supposedly, the park board would not start meetings until Ms. Kenyon arrived, even if she was late. Of course, officials complained about his often scathing comments in open sessions. Years ago, I reluctantly conveyed their displeasure to then-editor Tom Driscoll, himself a stern character, who rolled his eyes and literally threw his hands up. .

To be a woman and accomplish what Theo did, you had to be tough. (She preferred the term “stubborn Dutch.”) And yet, for all his fierce and surly ways, most of Theo’s stories are truly love stories: the love of journalism. Love of music and art. The love of her husband, Leslie, and their mutual passion for historic preservation. Peoria love. Love of friends.

Every Christmas, the Kenyons held court with a wassail at the Les house designed on the Illinois River Bluff. From the 40-foot Christmas tree festive lights that marked the bend to the chauffeured walk on the winding woodland path to Limoges plates laden with small deli sandwiches, they sought to delight their guests.

Songs were sung around the grand piano. Journalists, lawyers and professors passed by for a taste of Trefzger’s cookies and crab dip and freshly grilled pecans from The Nut House. St.-Emilion Grand Cru was generously poured into the punch bowl and personally applied by Theo, a lavish touch that dismayed the more frugal but grateful art critic Jerry Klein.

Her everyday man, Sam Johnson, started out as a wassail driver and ended up as a surrogate son. He was pretty much the only person she would have allowed to visit in the past two years, especially after his fall in May. On one of the rare occasions that she allowed me in, I berated her.

“You make it so hard to love yourself, Theo.”

She looked up with her straight half-smile.

The holidays, unfortunately, have passed. This year begins with far fewer journalists than a century ago, including a particularly Dutch icon. 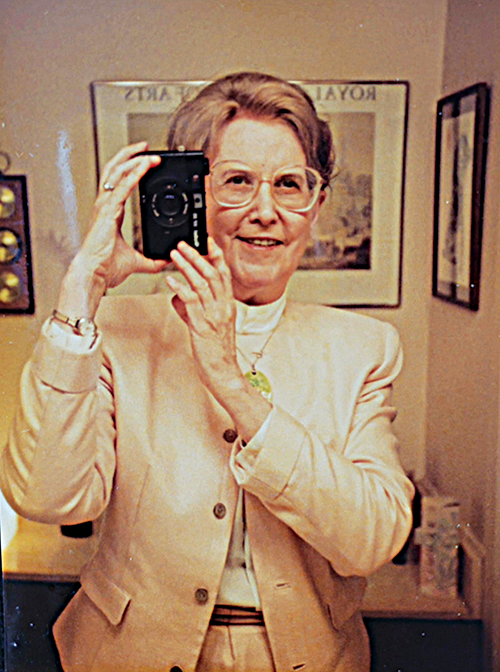 Theo Jean Kenyon was an institution at the Peoria Journal Star during an incredible 66-year career as a reporter. (PHOTO SUBMITTED)